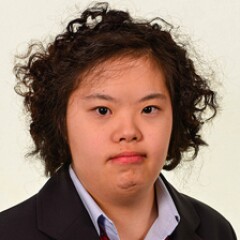 Today, her passion is spreading the word about Special Olympics Unified Sports and playing the drums in her band, Yoonaband. For the last six years, she has played in Yoonaband. The band is made up of seven girls, including five girls without intellectual disabilities. She is currently a senior in college, studying music as her major. "My two passions are unified sports and drumming. Unified Sports must get off the ground in Korea and I'm going to help make that happen and do whatever I can to encourage more people to play and get involved with unified sports. With playing the drums, I forget everything else. I'm the most happy [sic] when I get to play with my band. Special Olympics gave me the confidence to find my true passions and I'm forever grateful.