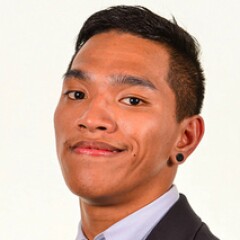 Born with both physical and intellectual disabilities, Chanchai was 8 years old when his father passed away. His mother was left raising two young boys on a modest income working at the local farm. Although his family struggled financially, his mother wanted Chanchai to have opportunities to meet friends and build his overall self-confidence.

He lacked self-confidence because he was always falling and had a hard time learning how to walk. One of Chanchai's greatest achievements was being able to walk without falling. "People often teased me when I continued to fall. I didn't want to be teased anymore so I worked hard to learn how to walk, and I thought, I might not be good at a lot of things, but maybe I'm good at sports." Chanchai says 'sports changed his life.'

Chanchai found out about Special Olympics at his school and joined when he was just 13 years old. The rest is history. "Playing sports has allowed me to be stronger." He began not only practicing sport through his physical therapy, but also playing football (soccer) on a Special Olympics team. Playing football also gave Chanchai a confidence boost to seek out leadership opportunities within Special Olympics Thailand. He had always been afraid to speak in front of large crowds and was nervous and self-conscious. He has participated as a member of the National and Regional Games Organizing Committees, as a regional sub-committee member and Board Member for Special Olympics Thailand. He has been trained in speech and governance, volunteer training, as an Assistant Coach for Special Olympics Young Athletes, serves as a member of the Asia Pacific athlete input council and has given numerous speeches at a variety of events.

He says the hardest part about playing football is the practice and finding the time to stay fit and being able to run the long distances required in his position as a forward on his Special Olympics team. Chanchai has earned 9 medals in football - 3 gold medals, 2 silver medals and 4 bronze medals.

In addition to playing football whenever he has the chance, Chanchai works full time at UNIQLO, Seacon Square Branch, Bangkok. "I want to tell all special needs children or adults to not look down on themselves. In the world today, there is opportunity for everyone."