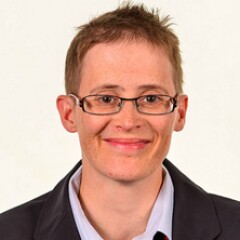 Johanna is from Vandans, Bludenz, Austria. As an International Global Messenger, she seeks to take the ideas and wishes of her fellow athletes and turn them into reality.

Johanna hails from a family of nine, which includes three other siblings with intellectual disabilities. Johanna credits Special Olympics with changing her life by helping her be more independent, developing friendships, and learning to trust more.

Johanna is very competitive and likes to make goals for herself in the myriad of sports in which she competes (alpine skiing, swimming, floorball, athletics, golf, fitness). She is a four-time World Games athlete, including the 2007, 2009, 2011 and 2013 events, who shares that she always has fun competing. She also plays Unified Sports and won gold with her partner Josef at Austria’s National Games in her first time competing Unified. Johanna won silver in Unified golf at the 2011 World Games with her partner Edwine.

An athlete who focuses on training year-round, Johanna shares that her favorite athletes are Michael Phelps, Anna Fenninger (an alpine skier in Austria) and Tiger Woods. Her favorite celebrities include Lenny Kravitz, Jon Bon Jovi and Linkin Park. In addition to her involvement with Special Olympics, Johanna works in a nursing home Monday through Friday, enjoys meeting friends, spending holidays in Italy and making looming bands (bracelets).