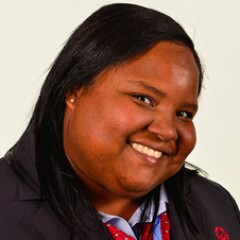 Nitzeida was 11 when her mother died and her grandmother took her in, even as some of her siblings were living in the streets of Panama City. These were rough times, but one day Nitzeida saw something that gave her hope. On TV, she saw a brief story about Special Olympics athletes. “They were running and jumping and I knew I wanted to be there with them.” Her grandmother told her there was no money for such things, but young Nitzeida made her way to where the athletes were training – without telling her grandmother -- and found out Special Olympics was free! She’s been with Special Olympics ever since, starting out in athletics (shot put, track), later moving on to tennis and bowling.

She says Special Olympics “totally” changed her life – showing her a path to success and even gave her grandmother a support network while learning to raise a child with special needs. Nitzeida says her life became full – with many friends, both athletes and coaches. “They are like another family,” she says.

Her grandmother died a year ago, and now Nitzeida is living with her sister. She continues along her path to independence, which started with cooking school a few years ago. This led to a fantastic job: Nitzeida is on the cooking staff for Panama’s president. “I try to make his favorites, like sushi and fish and vegetables.” She says it’s hard work “because there are so many people around, watching what you are doing. So you have to be really careful.” But she loves it.

She says the hardest part about sports is training and running. Lately, she’s been working on improving in bowling. Her best score is 120—but she’s working on beating that. Her biggest challenge has been learning to speak to large groups. Then again, she says it’s easy to talk about Special Olympics.

One of her goals is to tell more people about Special Olympics health programming – because she thinks people don’t know enough about it. It was a Healthy Athletes screening that helped get her own eye-problem diagnosed. For years, Nitzeida lived with an untreated eye condition stemming from a childhood fall. But a Healthy Athletes exam put her on the path to treatment.

“I make great friends and love the opportunities. Also, in my country, it’s one of the only ways some athletes can get a health exam.” She adds, “Special Olympics gives you a chance to develop your skills, be healthy and change your life. Without Special Olympics, I don’t know where I would be.”