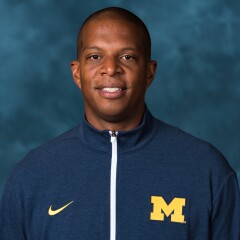 Chaka Daley enters his 11th year as the head coach for the University of Michigan men's soccer program. Daley is 86-70-31 during his 10-year run in Ann Arbor. He was named the second head coach in program history on Dec. 23, 2011. Daley has engineered a massive turnaround the last five years, leading Michigan to a record of 49-27-16 with one Big Ten title (2017), two trips to the Big Ten Tournament final, and three consecutive NCAA Tournament berths from 2017-2019 -- a program first. He was named Big Ten Coach of the Year in 2017.