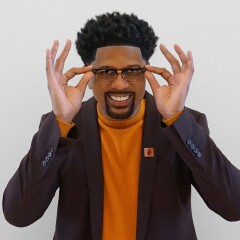 Current ABC/ESPN analyst and former 13-year NBA star Jalen Rose is one of the few professional athletes to maintain a high-profile post-retirement. Long known for his post-game quotes and great relationship with the media, Jalen continues to show his versatility in the broadcast booth, in the entertainment world, and as a philanthropist.

Jalen was born and raised in Detroit, Michigan, where he attended Southwestern High School and the University of Michigan. In college, he was part of the legendary “Fab Five” where he and his teammates revolutionized the sport of basketball on the court and off by wearing baggy uniform shorts, black socks, and black shoes. The first team in Final Four history to ever start five freshmen, they led the Wolverines to back-to-back NCAA Championship game appearances. In 1994, Jalen was drafted in the first round by the Denver Nuggets. Notable highlights from his thirteen-year NBA career include winning the NBA’s “Most Improved Player” and “Player of the Week” awards in 2000 and “Eastern Conference Player of the Week” accolades in 2005. As a member of the Indiana Pacers, his team appeared in three straight eastern conference finals, including a trip to the NBA Finals in 2000. In 2003, he was honored with the Professional Basketball Writers Association Magic Johnson Award. Jalen was inducted into the Detroit High School Hall of Fame in 2013 and Michigan Basketball Hall of Fame in 2017.