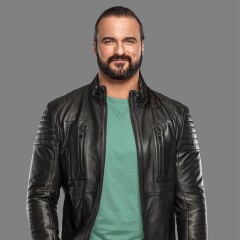 Drew McIntyre made his WWE debut at the age of 22. Despite being fast tracked for success at the time, the Scotsman was ultimately released, which turned out to be the best thing that could have happened to him. Unwilling to give up his dream of being a WWE Champion, McIntyre rededicated himself and returned three years later. After honing his skills, McIntyre learned to tap into his rare combination of size, athletic ability, and charisma that few Superstars can match. The WWE Universe is eager to count down with McIntyre before he obliterates his opponent with a Claymore Kick, which led him to realize his dream of becoming WWE Champion after defeating Brock Lesnar at WrestleMania 36.

In 2021, Drew McIntyre published a memoir, A Chosen Destiny: My Story following his life from a small village to WWE.

Drew McIntyre is no stranger to the Special Olympics movement. Over the past two years, he has worked side-by-side with Special Olympics athletes on a number of campaigns. He teamed up with athletes to create an online workout called School of Strength: Class is Now in Session.

In 2021, Drew challenged fellow celebrities and their social media followers to include people with intellectual disabilities through Special Olympics’ social media marketing campaign called Challenge Expectations. He took every opportunity to raise his voice in support of improving the health and fitness of Special Olympics athletes. Drew teamed up with Special Olympics Tennessee athlete Alex Hannah to challenge their followers to jump rope for 30 seconds and post on social media. Celebrities and influencers quickly followed suit, and the campaign turned into a big success across the globe.