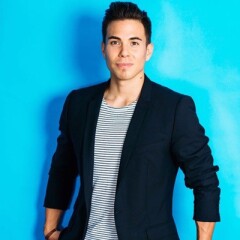 A three-time Olympian in short track speedskating, Apolo Ohno is the most decorated U.S. Olympic winter athlete of all time with eight medals, including two golds.

Ohno became interested in short track speedskating at age 12 while watching the Olympic Winter Games Lillehammer 1994. Despite his late start, it only took Ohno two years to become the youngest national champion ever, and he went on to win 12 national titles throughout his illustrious career.

The Seattle native won "Dancing with the Stars" in 2007, appeared on "Project Runway" as a guest judge in 2008, hosted "Minute to Win It" for one season (2012-13) and currently serves as a color commentator for NBC's "Spartan: Ultimate Team Challenge." In addition, he has worked for NBC at three consecutive Olympics, serving as a sportsdesk reporter at London 2012 and Rio 2016, and as a short track analyst at Sochi 2014 and PyeongChang 2018.

In recent years Ohno has branched out into new ventures. In 2014, he competed in the Ironman Triathlon in Kona, Hawaii. Later that year, he hosted the Apolo Ohno Invitational in conjunction with US Speedskating in Salt Lake City, bringing together the top speedskaters in the nation for a weekend of friendly competition.

Ohno is a Special Olympics Global Ambassador and travels the world for the organization. His book, "Zero Regrets," details the inspiring story behind his enduring success as an elite athlete and was a New York Times bestseller.

Engagement: In 2012, Ohno traveled to support Special Olympics Nippon at its Winter National Games in Fukushima, where he participated in Opening Ceremonies and hosted skate clinics. He continued to China to host several skate clinics, where he drew inspiration for his blog, Fly Your Hope.