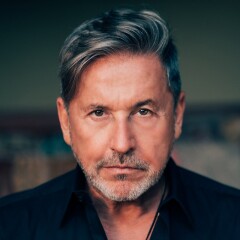 Grammy Award winner, Ricardo Montaner is an Argentine-Venezuelan singer and songwriter. Starting his career in the early 1980s, he has released more than24 albums with numerous successful singles. Ricardo Montaner has sold over 65 million albums and keeps breaking records in arenas and theaters all over the world.

He and his wife founded The Foundation La Ventana de los Cielos—Window of Heavens—in Florida and in Rosario, Argentina. La Ventana de los Cielos a non-for profit organization dedicated to assist children with special needs and their families through specialized activities and therapies that help improve quality of life. Montaner is also a UNICEF Goodwill Ambassador since 2007. That year Montaner was also appointed Health Champion by the Pan American Health Organization, participating for the fourth time in the Vaccination Week Program in the Americas.

Montaner is married to Marlene Rodriguez Miranda and has five children. His sons Alejandro, Héctor, Ricky and Mauricio and his daughter Evaluna, are also singers. Besides being a singer Evaluna—the youngest of the clan—is also an actress, currently starring in a Nickelodeon soap opera Club 57. Montaner resides with his family in Miami Beach, Florida.