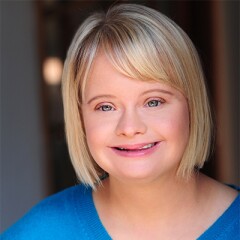 An inspiration to all, Lauren Potter has proven herself to be a young woman of strength and character. When professionals told her she “couldn’t” or “wouldn’t,” she worked harder—sometimes to the point of exhaustion. Barriers and limitations put before her became a personal challenge to let people know she is worthy of high ideals and capable of great expectations.

Lauren danced before she could walk. She began classes at the age of three and has been doing ballet, tap, jazz and even hip-hop ever since.

She made her acting debut in the movie “Mr. Blue Sky,” where her impressive performance caught the attention of the producers of the hit FOX television series, “Glee,” on which she played the spunky character ‘Becky Jackson’ for six seasons. She was nominated for a SAG Award in the category of “Ensemble in a Comedy Series” for her work on “Glee.” Lauren was also honored with the SAG/AFTRA Harold Russell Award at the Media Access Awards for this series.

Lauren is thrilled to be using her public “voice” that “Glee” has given her to speak out for other people with disabilities who may not have the same opportunities.

She was an Ambassador for Special Olympics World Games and was also appointed to President Obama's Committee for People with Intellectual Disabilities. Lauren served for three years on the International Board of Best Buddies and has worked with the non-profit in conjunction with Special Olympics’ “R Word: Spread the Word to End the Word” anti-bullying campaign.

Lauren has since starred in and executive produced the indie drama “Guest Room,” which made its debut at the 2015 SXSW Film Festival. Most recently Lauren guest-starred on HBO’s “Veep,” Freeform’s “Switched at Birth” and Comedy Central’s “Drunk History.” She also starred in a PSA for World Down Syndrome Day humorously redefining what ‘special needs’ are.