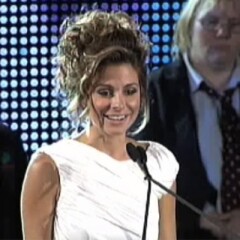 Maria is a New York Times best-selling author, host of E! News, host on Sirius XM, AfterBuzz TV CEO, was a Unified Relay Across America Co-Captain and is a Special Olympics Global Ambassador. She has interviewed every U.S. president since Clinton. Her ground-breaking conversational style of hosting led her, at age 22, to become the youngest to host "Entertainment Tonight." as well as report for "NBC Nightly News" and "the Today Show". She's starred in movies, is a 2 time NY Times best-selling author and CEO of the largest online broadcast network, AfterBuzz TV.

Although Maria Menounos's announcement as a Global Ambassador for Special Olympics didn’t happen until March 2015 which was announced on Live! With Kelly and Michael, Maria has been an Ambassador since November of 2014. Maria served as a co-captain for the first-ever Special Olympics Unified Relay Across America presented by Bank of America. She lead the Special Olympics celebrity campaign for the Special Olympics World Games Los Angeles 2015 by engaging the Hollywood community to support more than 6500 athletes from 165 counties who competed at the Summer Games. In her role, Maria will continue to pave a way for acceptance and inclusion for all athletes throughout the world.