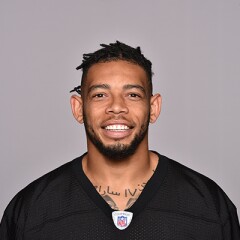 Born Joseph Walter Haden III, Native of Fort Washington, Md., where he attended Friendly High School - a four-year starter at quarterback who set a Maryland public school record with 7,371 career passing yards. As a senior he led his team to the Class 3A state football title with a 14-0 record. Joe started for his school’s basketball team that won a state title. He played college football for the University of Florida, was recognized as a unanimous All-American, and was a member of a BCS National Championship team. He was selected by the Browns in the first round of the 2010 NFL Draft as the 7th overall pick. On December 27, 2013, Haden was voted to his first Pro Bowl Selection. Joe is the eldest of five boys, his brother Josh was a running back for Boston College, his brother Jordan is a safety for University of Toledo and his brother Jonathan is a running back for University of Arizona. His brother Jacob is a Special Olympic athlete. Jacob competes in the 100 meters race and bocce.