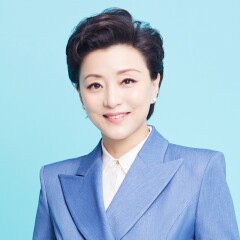 Yang Lan is a household name in China, as a leading broadcast journalist and media entrepreneur. She is the Co-founder and Chairperson of Sun Media Group and Sun Culture Foundation. Sun Media Group is one of the leading private media companies in China with businesses ranging from original content to integrated communications, women’s continued
education and location-based entertainment & sports. Sun Culture Foundation is a non-profit organization aiming to improve education and promote philanthropy.

Ms. Yang became a rising star by hosting CCTV’s “Zhengda Variety Show”, which earned her the “Golden Microphone Award”,she created her signature show “Yang Lan Studio”, now named “Yang Lan One on One”. “Yang Lan One on One” has become China’s longest-running in-depth talk show, with up to 1000 interviews with leaders from around the world. In 2000, Ms. Yang and her husband Dr. Bruno Wu launched Sun TV, Greater China’s first documentary satellite channel. In 2005, she created “Her Village”, a TV talk show geared towards Chinese urban female audience, which is developed into a multimedia community to empower women. She is committed to promoting cross-cultural exchanges. She is the only person to have represented Beijing twice for its successful Olympic biddings. She was named as Goodwill Ambassador for 2010 Shanghai Expo.

Ms. Yang has served as MC and moderator for many events including the opening and closing ceremony of Beijing Olympic Games and Paralympic Games, the opening ceremony of Shanghai Expo, Special Olympics Global Development Summit, APEC Women and the Economy Summit, World Economic Forum, Fortune Forum and China Charity Forum.

To promote philanthropy and civil society in China, Ms. Yang, collaborating with Hauser Center for Nonprofit Organizations at Harvard University and Center for Civil Society Studies at Peking University, organized capacity building workshops and international forums for NPO leaders in China. In 2010, with Bill & Melinda Gates Foundation, she coorganized the “Giving Pledge” event in Beijing, which is regarded as a milestone in philanthropy development in China.

She is the first Chinese UNICEF Ambassador, and the Vice-Chairman of China Charity Alliance.

Ms. Yang was honored with many awards, including Columbia University SIPA’s “Global Leadership Award”, the “National Philanthropy Award”, “Women’s Achievement Award” by All-China Women's Federation, “40 Returned Scholars in 40 Years of China’s Reform and Opening-up”, “70 Returned Scholars in 70 Years”, the Paley Center for Media and AOL’s “Makers” award. She is one of The World’s 100 Most Powerful Women by Forbes.