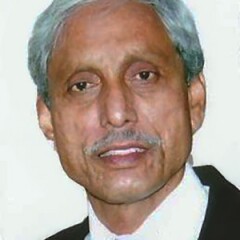 Recipient of the Dhyan Chand Lifetime Achievement Award 2010 by the President of India in recognition of his exceptional contribution to the Development of Sports in the country, Mr Satish Pillai, has been elected Chairman of Special Olympics Bharat He is a keen and well reputed sportsperson, having represented India in International Championships. He represented India in the Asian Games 1974 (Tehran) and in the first Asian Athletic Championship in (Manila) in 1973, in long jump, winning bronze medals on both occasions.

His association with SO Bharat goes back to over 20 yrs. He has been the Chairman of Special Olympics Bharat after being President of the Special Olympics Bharat-Jharkhand State Committee. He has been instrumental, not only in overseeing growth and development of the SO program in India but also in providing significant and sustained financial corporate support at both, National and International levels.

He served Tata Steel Limited for over 40 years, having retired as Advisor to the Managing Director in 2011. During this period he shouldered responsibilities for several projects related to the development of Sports and CSR (Corporate Social Responsibility).

He has been a Member of the Confederation of Indian Industry (CII) National Committee on Sports, and on the Advisory Committee of the Naval Tata Centre of Excellence, Kolkata in Sports Management, in addition to being on the committee for several National Sports Federations. In 2009, he was awarded with Tata Electric Companies Officers’ Guild Award for the Best Gentleman Sportsperson and was presented a Special Award for his contribution to the cause of sports, by the Tata Sports Club. This included organizing sports in the rural areas for persons with Disabilities.

With this background he is well known and recognized for his management skills, sports achievements, social responsibilities and the development of sports at the National level.