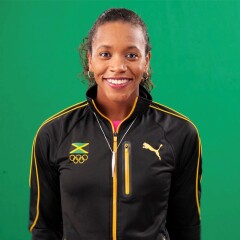 Alia Atkinson, CD is a 4 time Olympic swimmer, representing Jamaica in the 2004, 2008, 2012 and 2016 Olympics. After moving from Jamaica to Florida, she focused on academics and athletics in pursuit of going to Texas A&M University. There Alia became a All-American all four years, won numerous medals at the NCAA championships in the 100 & 200 yard breaststroke, and was inducted into the Texas A&M Lettermen's Association's Hall of Fame Class of 2019. After a prolific collegiate career, Alia went on to break the world record four times in the 50 &100 scm breaststroke and was named Jamaican Sportswoman of the Year thrice. For her breakthrough in the sport of swimming and her 'Watabound' swim clinic platform, which promotes swimming in developing countries, Alia was awarded the Order of Distinction in the Rank of Commander (CD) by the Governor General of Jamaica. She currently is training and has her sights set on her 5th Olympics in Tokyo, Japan.