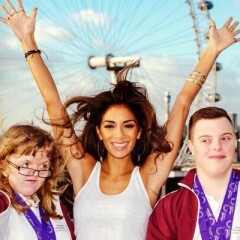 International recording artist and television presenter on the X Factor in Great Britain, Nicole Scherzinger, was announced a Special Olympics Global Ambassador in 2013 to support the movement and promote A Very Special Christmas music that benefits Special Olympics. The A Very Special Christmas ICON single (released only internationally), is a recording of 'O Holy Night', which was produced by award winning producer, David Foster is the gift that continues to give back to the movement.

Nicole Scherzinger was born in Honolulu, Hawaii, and raised in Louisville, Kentucky. Scherzinger rose to fame as the lead singer of the Pussycat Dolls and released the albums PCD (2005) and Doll Domination (2008) becoming one of the world's best-selling girl groups of all time.

Throughout her career, she has sold over 16 million records as an artist, and more than 54 million records with The Pussycat Dolls. Currently working on several projects including being a judge on the Masked Singer, Nicole continues to dedicate her time to Special Olympics. She enjoys developing relationships with the athletes particularly in the United States and in Great Britain. She has made a number of friendships with athletes over the years.