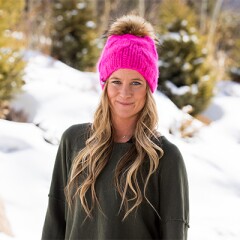 World Champion snowboarder Hannah Teter is an Olympic gold medalist and passionate humanitarian. In 2014 Teter became the first Action Sports Global Ambassador for Special Olympics. Born into a family of snowboarders, the Belmont, Vermont native excelled at a young age and became the youngest member of the U.S. Snowboarding Team in 2003. She won her first X Games medal at the age of 16 and has captured an additional five throughout her career. During her Olympic debut in 2006 Hannah championed the halfpipe competition and won the gold medal. She went on to compete in the 2010 Olympics where she landed the silver medal in the halfpipe competition and was a contender at the 2014 Games where she placed fourth. Hannah has been recognized for her snowboarding success and philanthropic efforts with accolades such as the ESPY for Best Female Action Sports Athlete, VH1 Do Something Award for Athlete of the Year, and modeled for Sports Illustrated Swimsuit in a section devoted to Winter Olympians.