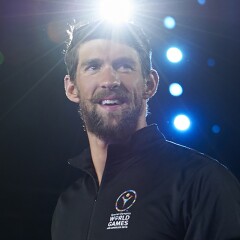 Michael Phelps is widely regarded as one of the most accomplished athletes of all time. He captured more Olympic medals, World Championships, US National Titles, and world records than any other swimmer in history. Throughout his career, Phelps has been committed to helping to promote the sport of swimming at all levels. He established the Michael Phelps Foundation in 2008 to promote water safety, healthy living, and the pursuit of dreams. That same year, he was recognized by Sports Illustrated as the “Sportsman of the Year” while, befittingly, Eunice Kennedy Shriver posthumously received the publications “Legacy Award.”

Phelps’ relationship with Special Olympics began as an Ambassador of 2007 World Summer Games in Shanghai, China, which included a number of swim clinics with athletes from Special Olympics China. With a shared vision to provide opportunities in the sport of swimming to people of all ages and abilities, Phelps was named a Global Ambassador in 2011 and his Foundation's signature program, im, was designated as Special Olympics’ Official Swimming Program. The partnership was solidified with a groundbreaking international pilot program that spanned seven countries across six continents. The Foundation developed the Young Athletesim, for a swimmers first introduction to the water in 2012.

The 2015 World Summer Games, which Phelps served as a flag bearer for the Opening Ceremonies, featured some of the im program participants who qualified for the Games as well as a special im Fast Swim Clinic clinic and relay for other athletes in attendance. Since then, thousands of athletes spanning more than 35 countries have been afforded the opportunity and encouragement to become more comfortable, confident and faster in the water.

His work with the Foundation has earned him recognition as the AAFA’s “Humanitarian of the Year,” Boys & Girls Clubs of America “Champion of Youth,” Laureus’s “Excellence in Achievement,” and SAMHSA’s “Special Recognition Award” among others. Michael Phelps Foundation continues to work with Special Olympics providing coaches training around the world.