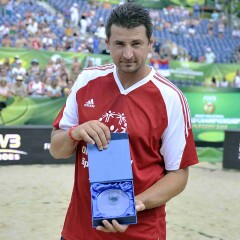 Vladimir 'Vanja' Grbic is a former Yugoslav Volleyball player and a member of the Volleyball Hall of Fame. Grbic is a two time Olympian medalist with a gold medal from the 2000 Summer Olympics in Sydney and a bronze medal from the 1996 Games in Atlanta. His international victories include a silver medal at the 1998 World Championship and a gold medal at the 2001 European Championship. In addition to his many medals, Grbic has been declared the Best Sportsman of the Year, the Best Athlete in Yugoslavia, the Best European Volleyball Player, and the Best Volleyball Player of the Century in Yugoslavia. Within his community, Vanja is the General Secretary of FIVB athletes commission.