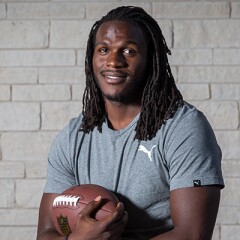 Jamaal Charles is a retired National Football League (NFL) running back. Jamaal Charles was a perennial All-Pro and Pro-Bowl running back who played for the Kansas City Chiefs (2008 – 2016) and Denver Broncos (2017). Jamaal excelled as a child in sports getting his first introduction to sports as a Special Olympics Athlete and then as a teenager. He became an All-American high school football player and track athlete. At Port Arthur Memorial High School, he rushed for over 4,000 yards and had 50 touchdowns in his final two seasons. Jamaal attended the University of Texas where he was a standout running back and won a NCAA National Championship on the 2005 team. His college career led him to becoming a 3rd Round Draft Pick of the Kansas City Chiefs in the 2008 NFL Draft. Jamaal is currently the Chiefs all-time career leader in rushing yards, a four time Team MVP, and is widely considered one of the best players in the NFL. Further, Jamaal is the NFL's all-time career leader in yards per carry with a 5.4 average, ranking ahead of all-time greats Jim Brown (5.2) and Barry Sanders (5.0).

Jamaal was in the third grade when he discovered that he had a learning disability. Through his special education classes Jamaal went on field trips to Special Olympics events, then ultimately competed, and thrived in track and field. His involvement with Special Olympics continues to this day as he serves as a Global Ambassador for the movement.