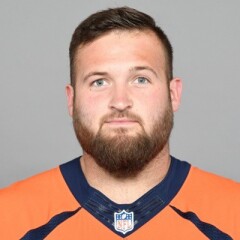 Far more than just a professional football player, Dalton Risner has always had a passion for helping others and making them smile. Raised in the small town of Wiggins, Colorado, his work on the family farm and involvement in the lives of friends and neighbors, molded Dalton into who he is today. The hard work paid off as Risner committed to Kansas State where he started in all 50 games during his 5-year career at the Big 12 school, ending his senior year being voted Big 12 Offensive Lineman of the Year. Dalton was drafted in the 2nd round of the 2019 NFL Draft by the Denver Broncos, 41st overall. He was one of only 10 rookies to start all 16 games during his impressive first NFL season, earning All-Rookie Team honors from numerous publications. He followed that up with another full season of starts for the Denver Broncos in 2020. Even as a highly decorated player, Dalton is better known for his work off the field, through Special Olympics, the Big Brothers/Big Sisters program, Camp Hope, and his own foundation, RisnerUp. Dalton believes life is measured by the joy you bring to others—not your own individual accomplishments.