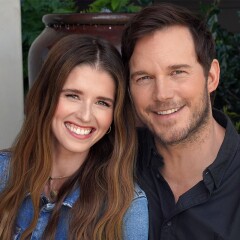 Katherine Schwarzenegger Pratt is a New York Times best-selling author, animal advocate, daughter, sister, wife, mother and step-mom. As a passionate animal advocate, Katherine works as an Ambassador for Best Friends Animal Society and the ASPCA, lending her time, voice and energy to spread awareness about animal rescue. As an author, Katherine has skillfully translated her own personal experiences into all of her books that speak to her generation.

Katherine hosts a weekly Instagram Live series called BDA (Before During & After) Baby, every Thursday at 12pm PT. She has chatted with everyone from Jessica Alba, Lea Michele, Al Roker, Your Zen Mama’s Teresa Palmer & Sarah Wright Olsen, on topics ranging from infertility to how to introduce solids.

Katherine lives with her family in Los Angeles.

Chris Pratt recently starred in The Tomorrow War for Skydance and Amazon.

In 2019, Pratt appeared in the record-breaking hit, Avengers: End Game, which grossed over $2.7B worldwide. This was a follow up to Avengers: Infinity War, which also made more than $2 billion at the global box office. Prior to that, Pratt’s Star Lord led Marvel’s Guardians of the Galaxy franchise; the first installment was one of the top 3 grossing films of 2014 with over $770 million at the global box office. Guardians of the Galaxy Vol. 2 trounced every other film that opened in the summer of 2017, and surpassed the first episode’s box office with over $860 million worldwide.

In 2015, Pratt headlined Jurassic World, the seventh-highest-grossing film of all time, and returned to the wildly popular role of Owen in Jurassic World: Fallen Kingdom in June 2018. He just wrapped production on the 3rd installment of the franchise- Jurassic World: Dominion which is slated for a June 2022 release.

In 2016, Chris starred in the Sony sci-fi romance, Passengers, opposite Jennifer Lawrence. He additionally appeared in Antoine Fuqua’s The Magnificent Seven opposite Denzel Washington, which opened the 2016 Toronto Film Festival and closed the 2016 Venice Film Festival. 2015 also marked the end of seventh and final season of Emmy- nominated series, Parks & Recreation for which Pratt is perhaps best known for portraying the character, ‘Andy Dwyer’ opposite Amy Poehler, Nick Offerman, Aziz Ansari, and Adam Scott.

Pratt will make his television return in The Terminal List (based on the Jack Carr novel) for MRC & Amazon, which he is also executive producing.