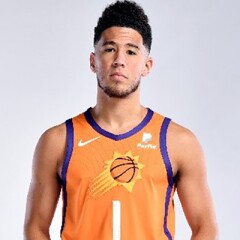 Devin Booker was selected as the 13th overall pick by the Phoenix Suns in the first round of the 2015 NBA Draft after playing basketball one year for the University of Kentucky. He was named to the NBA All-Rookie First Team in 2016 after averaging 13.8 points per game. In 2017, Booker became the sixth player in NBA history to score 70 points, the youngest player to ever do so at the age of 20. His stats and leadership on the court for the Phoenix Suns continued to rise through 2018 and 2019, and Booker was named an NBA All-Star for the first time in February of 2020.