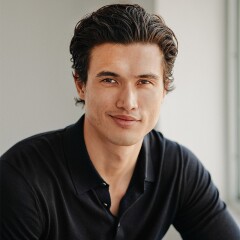 Charles Melton is one of Hollywood’s most versatile actors who continues to captivate audiences with his charismatic performances in film and television.

Melton was most recently seen in the highly successful feature Bad Boys for Life opposite Will Smith and Martin Lawrence. He will next star in Swing opposite Michael Shannon.

In 2019, he played the lead role of ‘Daniel Bae,’ in the Warner Bros.’ feature, The Sun Is Also a Star opposite Yara Shahidi. Directed by Ry Russo-Young and based on the New York Times best-seller by Nicola Yoon, the film chronicles the whirlwind romance between ‘Daniel,’ the son of Korean immigrants, and ‘Natasha,’ played by Shahidi.

On television, Melton currently stars as the iconic comic book character, ‘Reggie Mantle’ in The CW’s hit series, Riverdale. In its fifth season, the series is a modern-day reimagining of the Archie Comics.