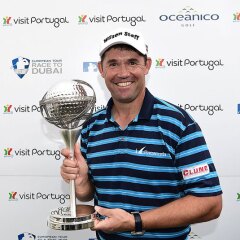 As a three time major champion, Padraig's playing record speaks for itself. Having won the 2007 British Open Championship at Carnoustie in a dramatic play-off, Padraig became the first European since 1906 to defend his British Open title a year later at Royal Birkdale. A month later he won the 2008 PGA Championship at Oakland Hills, becoming the first European to win back-to-back major championships. The three major wins in the space of 13 months helped him to reach a career high of 3rd in the World Rankings and earned him the European Tour, PGA Tour and PGA of America Player of the Year awards.

In addition to his three major wins, Padraig won the 2006 European Tour Order of Merit title, was the first Irish winner of the Irish Open for 25 years in 2007. Since turning professional, in addition to representing Ireland in both the Dunhill Cup and World Cup events numerous times, winning the latter on US soil in 1997, he has been a member of the European Ryder Cup team six times to date, including four victories. Padraig’s recent successes include winning the 2015 Honda Classic on the PGA Tour and the European Tour’s Portuguese Masters in 2016. In 2019 he was appointed by the European Tour as captain for the 2020 Ryder Cup European Team which, due to its postponement, will now take place in 2021.