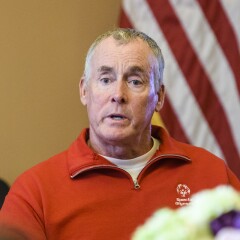 John C. McGinley's path to stardom is a story that reads like a classic Hollywood script. While an understudy in New York in the Circle-In-The-Square production of John Patrick Shanley's "Danny and the Deep Blue Sea," he was spotted by director Oliver Stone and soon after was cast in "Platoon," the first of a long list of collaborations between Stone and McGinley which includes "Wall Street," "Talk Radio," "Born on the Fourth of July," "Nixon" and "Any Given Sunday."

John C. currently stars in IFC's hit half-hour comedy-horror series, Stan Against Evil, on which he also serves as a producer. He has received much critical acclaim for his starring performance as disgruntled former police sheriff 'Stanley Miller,' a sour, aging bulldog who has lost his position as head honcho due to an angry outburst at his wife's funeral. When the new sheriff opens his eyes to the plague of angry demons haunting their small New Hampshire town, 'Stan' begrudgingly joins an alliance with her to fight them off. Season 3 is set to debut October 31, 2018.

For the big screen, John C. starred as 'Father Ollie' a chain smoking, carb-addicted Franciscan, in the feature "The Good Catholic," directed by Paul Shoulberg. Broad Green Pictures released the film theatrically and on VOD on September 8, 2017. The Good Catholic made its world premiere at the 2017 Santa Barbara Film Festival where it won the Panavision Spirit Award for Best Feature Film. It also won the Leonardo Da Vinci Horse Award for Best Screenplay at the Milan International Film Festival.

John C. is an audience favorite for his hilarious portrayal of 'Dr. Perry Cox' in the Emmy-nominated medical comedy series, "Scrubs," which ran for nine seasons. More recently, he starred for two seasons in TBS's workplace comedy series "Ground Floor," which reunited him with creator Bill Lawrence (͞Scrubs͟). He also made a memorable arc on season 6 of USA Network's hit drama series "Burn Notice."

John C.͛s impressive career in film spans a diverse range of characters in over seventy films to date, including such features as "Get A Job," "Alex Cross," "Wild Hogs," "Identity," "The Animal," "The Rock," "Nothing to Lose," "Set It Off," "Seven," "Office Space," "Mother," "Wagons East," "Surviving the Game," "On Deadly Ground," "Point Break," "Highlander II," "A Midnight Clear" and "Fat Man and Little Boy." He also previously starred opposite Ice Cube in Sony/Revolution Studios' feature, "Are We Done Yet?," the sequel to the hit comedy "Are We There Yet?" He received critical acclaim for his role as Brooklyn Dodger's radio broadcaster 'Red Barber' in Warner Bros' "42," the life story of Jackie Robinson and his history-making signing with the Brooklyn Dodgers.

As a testament to his passion for the independent film community, John C. has appeared in director Eriq La Salle's "Crazy As Hell" and director Scott Silver's "Johns." He also worked on "Truth or Consequences, N.M.," Kiefer Sutherland's feature directorial debut and on "Colin Fitz," a film John C. co-produced which premiered in competition at the Sundance Film Festival. He starred in director D.B. Sweeney's independent feature, "Two Tickets to Paradise," which received raves on the festival circuit. For his performance in the later film, John C. was awarded Method Fest's Festival Director's Award, which is awarded for special recognition/excellence in film.

John C. is a partner at McGinley Entertainment Inc., an independent film production company with several projects currently in development. John C. first worked both sides of the camera, serving double duty as actor and producer for the romantic comedy "Watch It!" (with Peter Gallagher and Lili Taylor).

He received stunning reviews for his starring role in Dean Koontz's gripping and highly rated suspense drama, "Intensity," a four-hour original film for FOX-TV. He executive-produced and starred opposite John Cusack in HBO Pictures' western, "The Jack Bull," directed by John Badham; and he appeared in HBO NYC's "The Pentagon Wars."

In addition to film and television, John C.'s background is heavily rooted in theater. He received stellar reviews for his starring performance as 'Dave Moss' in the Broadway revival of David Mamet's acclaimed Pulitzer Prize-winning drama "Glengarry Glen Ross." According to Newsday, "John C. McGinley is especially dazzling as the hothead who plans the office crime." The play also starred Al Pacino and Bobby Cannavale and ran through January 20, 2013.

He was previously featured on Broadway in "Requiem for a Heavyweight" and off-Broadway in "The Ballad of Soapy Smith" and the original cast production of Eric Bogosian's "Talk Radio," both at the renowned Joseph Papp Public Theater/New York Shakespeare Festival. He often cites Papp as the most instrumental force behind his career.

In May 2005, John C. was invited and honored to deliver the keynote address at the commencement ceremony for the University of California San Francisco's (UCSF) School of Medicine, one of the top medical schools in the nation.

As the father of Max, his 21-year-old son with Down syndrome, John C. is committed to building awareness and acceptance of people with Down syndrome. He currently serves as an Ambassador for Special Olympics and is a board member of the Global Down Syndrome Foundation. John C. is also one of the original creators, in conjunction with Special Olympics, of the groundbreaking "Spread the Word to End the Word" national campaign to eradicate the "R" word (retard). He has blogged repeatedly on the Huffington Post, advocating acceptance and awareness of people with special needs as well as the importance of eliminating the "R" word.

He has recently appeared in high profile commercial campaigns for Speed Stick (as Coach Speedman), Halls Cough Drops (as Tough Love/menthol-lyptus and Soft Love/honey-lemon) and Carhartt (as the voice of founder Hamilton Carhartt).

John C. resides in Los Angeles and enjoys stand-up paddle surfing, weight lifting and golf. He married Nichole Kessler on April 7, 2007 at the couple's home in Malibu and they now have two daughters Billie Grace and Kate Aleena, in addition to big brother Max.