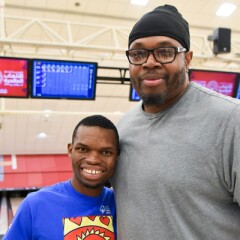 Sam Perkins was drafted fourth overall by the Dallas Mavericks in the 1984 NBA Draft. Perkins has enjoyed a wealth of success on the basketball court. He owns an NCAA championship ring and an Olympic gold medal, and he reached the NBA Playoffs in 13 of his 15 pro seasons.

Perkins went on to enjoy a successful 17-year NBA career. Playing for four different NBA teams (Supersonics, Lakers, Pacers and Mavericks), he scored over 15,000 points during his career and currently holds the Dallas Mavericks record for most points and rebounds recorded in a single game (30 points, 20 rebounds vs. Houston Rockets). In June 2008, Perkins was named the Vice President of Player Relations for the Indiana Pacers.

Although retired and no longer working for the Indiana Pacers, Perkins continues his work with the NBA via the NBA Cares program. This program is the league’s social responsibility initiative that builds on the NBA’s long tradition of addressing important social issues nationally and internationally. Perkins became involved with Special Olympics through the NBA Cares Program, which he participated in multiple basketball clinics around the world.

Engagement: Perkins attended his first ever World Games in 2007 at the Special Olympics World Summer Games in Shanghai and spoke to world leaders at the Global Summit during those Games. In April 2008, Perkins helped launch the first Special Olympics basketball program in Senegal. He served as a member of the Special Olympics International Board of Directors from 2009 – 2017. Perkins continues to support Special Olympics traveling around the world to bring awareness about the abilities of people with intellectual disabilities.