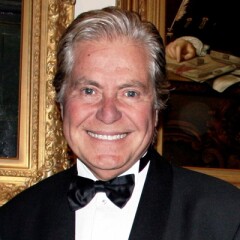 Hussein Fahmy, (born 22 March 1940), is an Egyptian actor. He graduated from UCLA with a Master of Fine Arts (MFA) degree. Academically he continued to teach at the Academy of Arts (film institute) for twelve years.

A leading movie star and the first UNDP Regional Goodwill Ambassador for the Arab States (1998 -2006), Hussein Fahmy is noted for his humanitarian effort. He has worked hard to convey to his audience in the Middle East important human development issues.

He worked in film and television industry for more than 50 years, specializing in film directing and appearing in over 100 film, television, and theatre productions. He was also appointed the President of the Cairo International Film Festival (1998–2001).

In March 2007, Fahmy was named the first Regional Ambassador for Special Olympics Middle East/ North Africa. In this role, he work to create awareness, provide support to 170,000 athletes in the region and encourage all members of the community to be involved in the movement. (2007-2017)