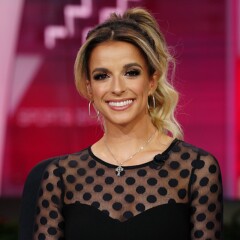 Victoria Arlen joined ESPN in May 2015 and works as a host and reporter. She reports and hosts across all platforms including Sportscenter, First Take, X Games, Special Olympics, Sportscenter on Snapchat, and many others.

Hired at the age of 20, she became one of ESPN’s youngest on-air personalities ever hired. She made her ESPN television debut as a features venue reporter at the 2015 Special Olympics World Games in Los Angeles.

Arlen has a remarkable story of overcoming odds and adversity. At 11 years old, she was diagnosed with two rare conditions; Transverse Myelitis and Acute Disseminated Encephalomyelitis. She soon lost the ability to speak, eat, walk, and move. She slipped into a vegetative state in which doctors had written her off as a lost cause. Arlen spent nearly four years “locked” inside her own body, completely aware of what was going on but unable to move or communicate. Doctors believed there was little hope of survival, and recovery was unlikely, but Arlen was not ready to give up. In 2010, after almost four years, she began the nearly impossible fight back to life, learning how to speak, eat and move all over again.

In the Spring of 2016, Arlen defied odds yet again and after spending nearly a decade in a wheelchair paralyzed from the waist down, she was able to learn how to take one step after another and eventually learn how to walk again. Within a year and a half, in the Fall of 2017, she learned to dance as a contestant on ABC’s Dancing with the Stars, advancing to the final five.

Her autobiography, entitled “Locked In,” was published in 2018, and in April of 2018, ESPN Films debuted a 30 for 30 titled “Locked In” based on her story. Arlen is carrying out her dream of helping others, serving as the Founder and Co-Chair of Victoria’s Victory Foundation, a nonprofit that assists those with mobility challenges to achieve their own personal victory. In addition to her work with ESPN, she also is a co-host of American Ninja Warrior Junior.