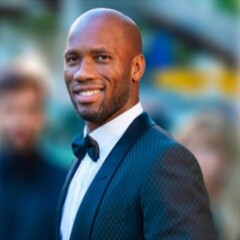 As one of the most successful football (soccer) players of all time, Didier Drogba has earned worldwide acclaim both as a professional sportsman and champion for peace in his native Côte d’Ivoire. Born in Abidjan, Drogba moved to France at an early age, becoming a global football player and leading the world-famous Chelsea club in London to multiple championships, including the world-renowned Champions League trophy. Drogba is still Chelsea’s most successful European goal scorer. Altogether, he scored 157 goals in 341 appearances with Chelsea, and helped the club to four English Premier League titles, four FA Cups and two League Cups. Drogba stands tall as one of the most powerful sports stars in Africa, twice named African Footballer of the year in his 104 caps for Côte d’Ivoire, amassing a record 65 goals and leading the national team in three World Cups.

Earning acclaim for his humanitarian efforts when the ongoing civil war ravaged Côte d'Ivoire in 2006, Drogba led the nation’s football team in prayers for peace. After the World Cup qualifying games, he called for an end to the war, with his efforts in unifying the country around sport eventually helped to bring about a cease-fire.