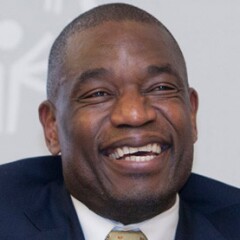 NBA Legend Dikembe Mutombo is the President and CEO of the Dikembe Mutombo Foundation, which he created in 1997. Located in Atlanta, Georgia, the foundation's mission is to improve the health, education, and quality of life for the people in the Democratic Republic of the Congo. One of their major projects was the construction of a new general hospital in the capital city of Kinshasa, DR Congo, the country in which he was born.

A graduate of Georgetown University, Mr. Mutombo played professional basketball for 18 years before retiring from the Houston Rockets in 2009.

He is the first Youth Emissary for the United Nations Development Program (UNDP); and he also served on the Advisory Board for the Fogarty International Center at the National Institutes of Health; and presently serves on the boards of the National Constitution Center and Opportunity International. Mr. Mutombo has also served as an advisor and consultant to Freeport McMoRan; and as an advisor to Hewlett-Packard.

Mr. Mutombo has been named ABC's Person of the Week, Essence Magazine's 2001 Achiever, and Sporting News' No. 1 Good Guy. Mr. Mutombo has been featured in Europe's TIME magazine, Sports Illustrated for Kids, the New York Times, the Philadelphia Inquirer and the Houston Chronicle just to name a few. In 2009, NBA Commissioner David Stern appointed Mutombo to the newly created position of Global Ambassador. In this capacity, he has traveled throughout the Middle East, Asia and Africa. Mr. Mutombo now works to expand and celebrate the game through numerous international NBA events including Basketball without Borders. In addition, he works closely on NBA Cares outreach efforts with Hall of Famer Bob Lanier, who serves as Special Assistant to the Commissioner. In 2015, Dikembe was inducted into the National Basketball Hall of Fame.